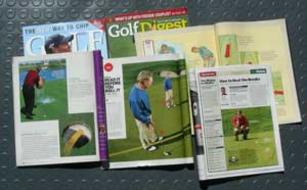 putt as your putter stroke has progressively less effect.  That's why we see putts take those major turns as they slow down near the hole.  If we could just hit the hole at any speed, we wouldn't have to account for the break.  We could just aim straight at the hole and let 'er rip.  But, of course, that's not going to sink many putts.  So, identifying the break at the hole is the first concept you must contend with.

To answer this question, we did something that very few people in the game had done up to that point - we measured the slope on a number of greens and charted how much a ball would break at various distances and degrees of slope.  The results astounded us.

For the following examples, we measured greens as if we were putting straight across (meaning at 90 degrees to) the break direction (downhill direction).  In each instance, we used the Dave Pelz "True Roller" (left - basically a calibrated ramp that propels a golf ball a consistently repeatable distance) to take the putter stroke out of the equation.  So we knew we were accurately measuring distance and slope only.  The measurements were done on both Bermuda grass and bent grass greens.  The numbers here are averages between them. 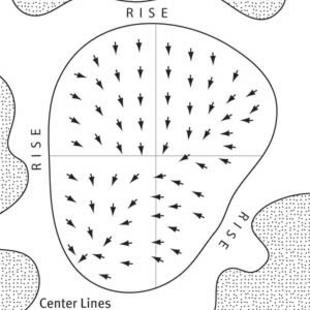 But how do you do that?  The experts also suggest you should walk around the green to get an idea of which direction is downhill.  Or you should observe the apparent direction of the slope as you walk up to the green from the fairway.  Well, this works if the break can be accurately observed visually - meaning its direction is obvious and you are not being confused by surrounding hills, swales, trees, etc.  Most of the time, this isn't so accurate.  It's easy to be confused and read a green as breaking one way when in fact it breaks in the opposite direction. As you can see in the drawing (an actual green at Riviera Country Club), greens will break in different directions depending on where the hole is on the green. 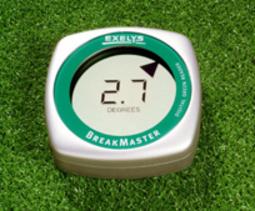 How Most Experts Identify The Break

green reading tips are useful only up to a point.  Far too often, experts in the game of golf identify the break only in terms of break direction, without regard to how the break's severity can affect the putt.  By indicating break direction as the sole critical aspect of green reading, they are only providing half the story.

What Is The Break Amount? 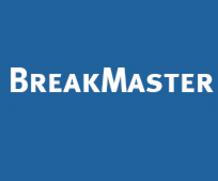 that accurately illustrates the break information for that green.  It is perfectly legal to refer to such a greens map during the game (this is what the Tour Pros and Caddies do).  By measuring and recording greens information, you are no longer playing like an amateur, but like a pro.  And if you're lining up your putts with the same information as the pros have, what do you think that will do to your scores?

I try to stay on top of the tips that various golf professionals provide through articles on green reading in the major golf publications and on the Internet.  For the most part, these tips are useful, as they focus on the need to understand the break - the most critical aspect to sinking a putt.  All but the shortest putts will break to some degree.  But these

Professional golfers can't make these kinds of mistakes.  They know that understanding both aspects of the break (break direction and break amount) are critical to sinking putts.  When thousands of dollars are riding on each putt, Tour Pros don't want to be guessing the break.  They want to know for sure.

Now, how do the experts suggest you identify the break direction? Here are a few ways: imagine throwing a bucket of water on the green and then imagine how the water would run off the green. This seems to make sense, because greens must be designed for water to run off, otherwise water would pool, making certain areas unplayable. So the bucket of water concept is fairly useful if you can get visual cues as to which direction is downhill.

To back up just a bit...  In order to understand the most basic concept of the break, golfers need to identify the break at the hole.  The break affects the ball most as it approaches the hole.  Why?  Because for most of your putt, the stroke of your putter determines the direction in which the ball will travel.  But as the ball slows down as it approaches the hole, the force of gravity kicks in, and gravity has progressively more effect on the roll of your

The Break amount, or the severity of slope, can affect your putt just as much as break direction. We've all seen greens that break a great deal, just as we've seen greens that hardly break at all. So far, the language that golfers have used to identify the severity of a green's break has been something like "subtle" or "wicked" - not exactly scientific designations.

Because putts and drives all count as strokes, Tour Pro Golfers and their Caddies understand the importance of identifying both of these critical aspects of the break - the break direction and the break amount - and compensating for them when they line up their putts. For years, Tour Pros and Tour Caddies have marked greens maps before tournaments with arrows to indicate the break direction. But in more recent years they've been adding additional information to these greens maps - the break amount - which is measured in degrees. A decade ago, Caddies started using a hardware device called a "Smart Level" to give them a digital readout of break amount in degrees. Since 2003, they've been using a far more convenient (and accurate) green reading device called the BreakMaster Digital Green Reader. The BreakMaster is essentially a digital level that measures and displays both aspects of the break (break direction and break amount). 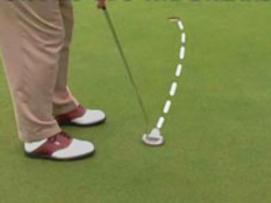 What Break Are We Talking About?

How Does The Break Amount Affect Your Putt?

How Do Tour Pros Deal With Break Amount? 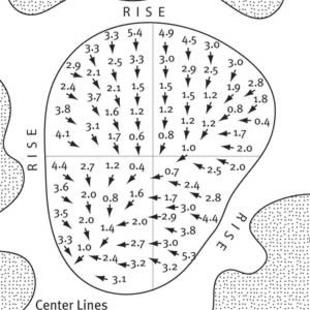 How Do You Find The Break Direction?

Most of the time, as you can see in the drawing, the break amount at any given point on the green is going to be anywhere from 0.3 degrees (practically flat)  to 1.5 degrees (gentle slope), up to something like 4.5 degrees (wicked!).  At anything over 5 degrees of slope, the ball simply won't hold the green and will roll right off.  But there is a lot of variation between the 1.5 degrees and 4.5 degrees that we see on the greens, and golfers need to understand how the amount of break affects the roll of the ball.

The myth is that there is only one aspect to the break on the green - the break direction - and once you know the direction of the break, that's all you need.  In thinking this, golfers are missing one of the two critical aspects of the break - the break amount (the severity of slope) - and how it can affect the roll of the ball.  They're also missing a lot of putts.

But look what happens to that 3 foot putt at 3 degrees of slope - you should expect 10-12 inches of break. That's a whole foot of break on a 3 foot putt! The results are even more astounding when you carry that 3 degree slope out to 9 feet - a whopping 40-46 inches of break. Have you ever allowed nearly 4 feet of break on a 9 foot putt? Well, have you ever sunk a heavily breaking 9 footer? But you do see the PGA Pros do it all the time. That's because they understand the concept of break amount.